Taken from:
WCry is so mean Microsoft issues patch for 3 unsupported Windows versions 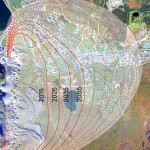 How Engineers Are Moving An Entire Town Two Miles Away