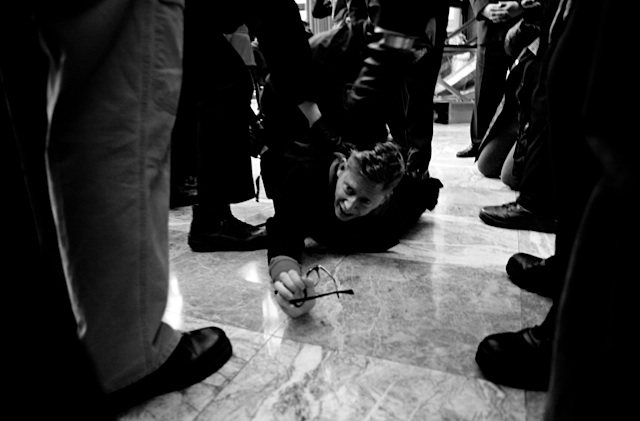 Writer and comedian John Knefel reaches for his glasses as police pull him away during an Occupy Wall Street protest in New York City yesterday. This really great photo was taken by Jessica Lehrman in the lobby of Winter Garden, a building owned by Brookfield Property, the same company that owns Zuccotti Park. To get a different view on the same scene, check out a video that someone else was filming at the same time. You can see Knefel falling down around 6:30.

The photo and video bring up something interesting. Knefel is a writer and comedian, one of the many people documenting OWS from the inside while trying to navigate the very grey boundaries of journalist and participant in the age of Internet journalism. Personally, I think this conflict is pretty interesting. If I can get all “journalism ethics class” for a minute here, I think OWS is drawing attention to the already existing need for new definitions of who constitutes “media” and who doesn’t. Why is this more confusing than you might thing? Let me use Knefel as an example.

Knefel doesn’t work for a major media outlet. But he’s also not just some random bystander. He’s got a political podcast with new episodes three times a week. Do we only call someone a journalist if they have enough page views? Do they have to have a journalism degree? What’s the line?

Knefel didn’t have a press pass. But, as Xeni has pointed out, the press pass system in New York is incredibly convoluted and contradictory. So what if you can’t get one? Does that mean you aren’t a journalist? This is particularly problematic given the fact that the rules seem to be set up to favor long-standing publications with lots of resources that mostly just cover New York City. How does that fit into a globalized world? Why punish media entrepreneurship?

We live in an age where publishing is easy and the tools to do it are available to a much wider swatch of people. But our standards and rules for who gets protection as a member of the press are based on a paradigm where publishing wasn’t easy and only a limited number of people could do it. At the same time, we have to acknowledge that not everybody who uses the Internet is a journalist, because being a journalist comes with responsibilities not just protections. I’m pretty sure my Dad doesn’t want to hold his Facebook to the same standard that I use when writing here.

I don’t know the answer to these questions. But I know we need to have this conversation. Occupy Wall Street just shows us what can happen when we keep applying old rules to a new world.

More here:
Who is a journalist?