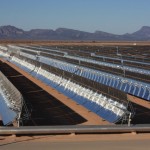 Solana is currently the largest parabolic trough plant in the world, covering more than 1,900 acres in southern Arizona. 4 more images in gallery GILA BEND, ARIZONA—Every afternoon during the summer, millions of people across the American Southwest come home from work and switch on their air conditioners, straining the power grid in states like Arizona. Traditional solar power—although perfectly suited to the sunny climes of this region—can’t meet this demand since the surge in use peaks just as the day’s sun is disappearing. That’s why most power suppliers diversify, using electricity from different sources to meet local needs. Solar power is abundant in the middle of sunny, clear days, but energy from other sources—coal, nuclear, or hydroelectric power for example—is necessary at night or when the weather is bad. But increasingly efficient technology is allowing solar plants to contribute for a longer period of time each day and produce energy even in cloudy conditions. The key is a design that allows them to store the sun’s energy to be used later. And new facilities, such as the Solana power plant that recently came online in Gila Bend, Arizona, are increasing solar energy’s niche by producing electricity several hours after the sun sets. Read 35 remaining paragraphs | Comments

NASA Will Create Fake Red And Green Clouds Near Virginia