As Microsoft continues to court businesses and encourage them to upgrade to Windows 10, the company has taken the novel step of publishing a roadmap of Windows 10 features . This roadmap describes business-oriented features that are coming to Windows 10. Some, such as biometric authentication in the Edge browser, have already been announced as part of the forthcoming Anniversary Update and are currently available in the Insider Preview . But others are not. While some are so vague as to tell us nothing—the Passport API used for biometric authentication is being “enhanced” to improve enterprise functionality—other features are rather more concrete. Microsoft plans to add device-based PC unlocking, wherein Windows and Android phones can be used to store authentication credentials, and the feature can be used to both unlock the PC and authenticate apps and services that use Windows Hello and the Passport API. The same is also being enabled for what Microsoft calls “Companion devices” that integrate with a new API called the “Companion Device Framework.” The Microsoft Band 2 fitness device will plug into this framework, and third-party devices will also be able to join in. Read 6 remaining paragraphs | Comments 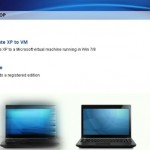 VirtualXP Runs Your Old XP Installation Safely in Windows 7 or...