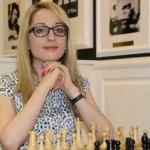 If you thought soccer’s world cup being awarded to baking-hot Qatar marked the zenith of sporting corruption, give FIDE a chance: the international chess federation’s forthcoming world championship is headed to Iran, and women players must wear the hijab to compete. UK tabloids quote leading women chess players as threatening to quit the tournament rather than obey. US women’s champion Nazi Paikidze said: ‘It is absolutely unacceptable to host one of the most important women’s tournaments in a venue where, to this day, women are forced to cover up with a hijab. ‘I understand and respect cultural differences. But, failing to comply can lead to imprisonment and women’s rights are being severely restricted in general. It does not feel safe for women from around the world to play here.’ She added: ‘If the situation remains unchanged, I will most certainly not participate in this event.’ It’s insane, but entirely in keeping with FIDE’s brainier-than-thou shiftiness, to think that Tehran is a good place to host the key event on their highly-politicized mind game’s calendar. For starters, there’s a current U.S. government travel warning telling citizens not to go there at all . (I would go, but wear a Burka)