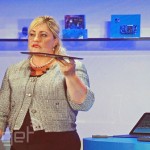 At Intel’s keynote presentation here at Computex, president Renee James is set to show off Intel’s mobile future: a 2-in-1 reference PC powered by the company’s new 14nm Intel Core M processor. 14nm processors means less energy use and, when the buck stops, longer battery life — something we can never get enough of. We’re still waiting to see what that design will look like exactly, but we do know it’ll be a hybrid tablet-laptop, measuring in at 7.2mm thick (keyboard detached), while a companion media dock will apparently offer extra cooling (and a performance burst). Update: As teased, in the flesh it’s a very thin tablet, with no fans to see. Intel’s president also teased the companion docks, although we only saw a glance of the keyboard add-on. Thankfully, it looked at thick enough to handle a bit of typing. It’s not the first appearance of Intel’s new Broadwell chips: Intel boss Brian Krzanich showed off a more vanilla laptop running on the chips late last year . Regardless, Intel says the series is set to be its most energy-efficient Core processor yet, and that the majority of the hardware running on the chip will be fanless, as well packing hybrid functionality — which explains why the reference design took the shape it did. As you can see above, Intel’s Core M family will offer around a 20 to 40 percent performance improvement, while SOC power could be up to 45% less, while producing 60 percent less heat — thus the fanless design. The new processor will also take up around 50 percent less space inside devices, whether that’s a tablet, a laptop or both. Filed under: Desktops , Laptops , Tablets , Intel Comments