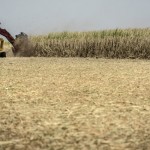 High-yield yeast converts 97 percent of a plant to biofuel