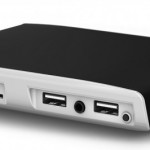 A new ARM-based Linux PC with a host of capabilities—including Wi-Fi, Bluetooth, two Gigabit Ethernet jacks, and five USB ports—goes on sale next month starting at $99. ” Utilite , ” offered by Israeli company CompuLab, won’t be as cheap as a Raspberry Pi , but the specs justify the cost. With dimensions of 5.3” × 3.9” × 0.8”, Utilite comes with a Freescale i.MX6 system-on-chip with a single-, dual-, or quad-core ARM Cortex-A9 processor (which uses 3-8 watts of power). It will have up to 4GB of DDR3 1066MHz memory, up to 512GB of SSD storage, and a microSD slot allowing another 128GB. The PC can be purchased with either Ubuntu Linux or Android. Read 4 remaining paragraphs | Comments