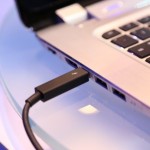 PCs that use Thunderbolt are rare, and they’re getting rarer. Chris Foresman For Thunderbolt fans hoping that the high-speed interface will catch on, we’ve got more bad news: an Acer representative talking to CNET  has said that the company has no plans to support Thunderbolt in its PCs this year. Acer’s Aspire S5 Ultrabook was one of the few Windows laptops to include Thunderbolt support when it was introduced in early 2012. “We’re really focusing on USB 3.0—it’s an excellent alternative to Thunderbolt, ” said the Acer spokesperson. “It’s less expensive, offers comparable bandwidth, charging for devices such as mobile phones, and has a large installed base of accessories and peripherals.” By itself, the news of one company distancing itself from Thunderbolt might not be a big deal, but this is just another example of the trouble that Thunderbolt faces two-and-a-half years after its public introduction in the 2011 MacBook Pro. A Newegg search reveals a handful of high-end desktop motherboards that support it (five boards, all above $150), but the complete list of non-Apple prebuilt systems that have ever supported the interface is pretty short . Read 2 remaining paragraphs | Comments