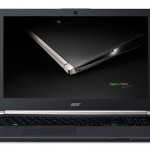 Hey, Toshiba: you’re no longer the only game in town for big-name laptops with 4K displays. Acer has announced a new version of its V Nitro Black Edition portable with a 15.6-inch, 3, 840 x 2, 140 screen at its heart, giving you extra-sharp imagery when you’re gaming or editing photos. It promises to be a better deal than its arch-nemesis. You’ll get a quad-core i7 processor and a 1TB spinning hard drive like the Toshiba PC, but you’ll also find a 256GB solid-state drive, 16GB of memory and GeForce GTX 860M graphics. In short, you won’t be hunting for upgrades on this system. The 4K rig should be available through Amazon, Microsoft, Newegg and Tiger Direct this month, or just in time to make it one heckuva gift… for yourself, naturally. Comments Via: VentureBeat Source: Acer (PRWeb)

See the original article here:
Acer’s first laptop with a 4K display ships this month for $1,500

Thermos’ New Smart Bottle Tells You When Your Water’s Warm and...