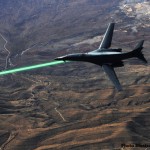 An artist’s rendering of HELLADS, a General Atomics-built laser weapon now in ground testing. Air Force leaders say a laser pod based on the technology could be aboard fighter aircraft within five years. DARPA Sometime very soon, combat aircraft may be zapping threats out of the sky with laser weapons. “I believe we’ll have a directed energy pod we can put on a fighter plane very soon,” Air Force General Hawk Carlisle said at this week’s Air Force Association Air & Space conference in a presentation on what he called Fifth-Generation Warfare. “That day is a lot closer than I think a lot of people think it is.” Some low-power laser weapons were on display in mock-up on the exposition floor of the conference, including a system from General Atomics that could be mounted on unmanned aircraft such as the Predator and Reaper drones flown by the Air Force. But the Air Force is looking for something akin to a laser cannon for fighter aircraft, more powerful systems that could be mounted on fighters and other manned Air Force planes within the next five years, Air Force leaders said. Directed-energy weapons pods could be affixed to aircraft to destroy or disable incoming missiles, drones, and even enemy aircraft at a much lower “cost per shot” than missiles or even guns, Carlisle suggested. The Air Force isn’t alone in seeking directed energy weapons. The US Navy has already deployed a laser weapon at sea aboard the USS Ponce, capable of a range of attacks against small boats, drones, and light aircraft posing a threat—either by blinding their sensors or operators, or heating elements to make them fail or explode. Other laser weapons are also being tested by the Office of Naval Research for use on helicopters to protect against man-portable antiaircraft missiles. (And there’s a railgun , but that’s not really a directed=energy weapon, and it’s too massive to be mounted on an aircraft). Read 18 remaining paragraphs | Comments