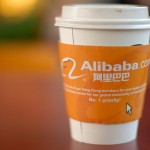 Charles Chan When Alibaba stopped trading its shares on Friday, the Chinese e-commerce company had officially logged the biggest Initial Public Offering (IPO) in US history, raising $21.8 billion in its first day on the New York Stock Exchange. The company’s earnings give it a market capitalization of over $200 billion, “putting it among the 20 biggest companies by market cap in the US,” the Wall Street Journal notes. Alibaba’s IPO beat out  record IPOs like Visa’s $17.9 billion IPO in 2008 and General Motors’ $15.8 billion sale in 2010. And Alibaba beat out its peers in the tech sector too, like Facebook (whose first-day earnings were $16 billion) and Google (whose 2004 IPO raised only $1.67 billion—paltry in today’s terms). Earlier this month , the company announced that it would price shares at $66 per share. This morning around 12pm ET, the NYSE gave the go-ahead for the company, whose ticker symbol is BABA, to start trading. Shares started at $92.70, a third larger than what the company was aiming for, and ended the day at $93.89 after reaching a high of $99.70. In after hours trading, Alibaba is just down slightly at $93.60 per share , as of this writing. Read 3 remaining paragraphs | Comments

See the original article here:
Alibaba raises over $21 billion, making it the biggest IPO ever in the US