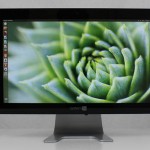 OMGUbuntu reviews the new System76 Sable Complete , a $799, expandable, open all-in-one computer that is price-competitive and performance-competitive with iMacs and other all-in-ones. I’ve owned some System76 laptops and have been generally impressed with both the build-quality and the support offered by the company — they’re always a good bet if you want to get a pre-installed GNU/Linux machine. The Sable is a gorgeous looking PC that (on paper at least) is faster, cheaper, more expandable, and better at running Ubuntu than the 2011 iMac I’m writing this article on. More impressively to my mind (and my wallet) is that although System76 are a niché retailer (meaning costs are often higher than those of mass-manufacturers) the all-in-one PC is competitively priced, even without WiFi, a disc drive, or input accessories. Compared against two similarly specc’d machines using other OSes – namely the Vizio and the 2011 iMac – the Sable stands up well. Meet The $799 All-in-One Ubuntu PC from System76 ( via Engadget )

You guys, cockroach-farming is totally the industry of the future