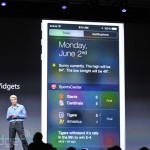 It’s been a long time coming, but Apple is finally adding support for widgets to iOS. On stage at its Worldwide Developers Conference , the company’s senior VP of Software Engineering, Craig Federighi, revealed that devs can now start building widgets within the Notification Center on iOS 8 . Unlike Google’s take on widgets with Android , Apple’s equivalent won’t have them living on the home screen of your smartphone or tablet. Instead, iOS widgets will share the drop-down hub with app notifications. Still, there’s a lot of potential here, as it’s going to let those of you with an iOS device have more interactivity and quick access to your favorite applications. iOS 8 will be available this fall. Filed under: Cellphones , Software , Mobile , Apple Comments

The level of detail in this Nostromo model component is INSANE