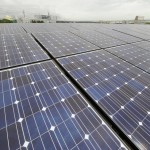 Army researchers at the Redstone Arsenal have announced a significant breakthrough in solar energy production. They’ve created a photovoltaic solar panel that is smaller, more robust and less expensive to build and operate than any other panel currently available. Virtually every solar panel currently in existence relies on a pure silicon construction, however the band gap (the wavelength of light that it can actually be absorbed and converted into electricity) of single crystal silicon is exceedingly narrow compared to the full spectrum shining down from the Sun. Not only does this mean that conventional panels are missing out on potential power, the ultraviolet and infrared wavelengths actively damage the panels by causing them to heat, warp and crack. The Army’s panel, on the other hand, sandwiches super thin layers of metals like silver and gold between the semiconductor layers. With these added layers, the panels offer a wider band gap for energy generation and can be tuned to reflect the harmful rays as well. What’s more, the Army’s panels generate the same amount of energy regardless of the angle that sunlight is hitting it. That means they don’t have to be affixed to expensive and motorized Sun-tracking stands. The technology is still in its very early stages, explained Wayne Davenport, Optical Sciences Function Chief of the Weapons Development and Integration Directorate, in a statement. “As with many basic research projects, the near-term benefits are sometimes yet undefined but are clearly worth the investment, ” Davenport continued. “The Army’s research laboratories at AMRDEC continue a legacy of high quality research projects and I expect to see many more of these type projects transition to the Warfighter in the future.” [Image Credit: AFP/Getty Images] Filed under: Science Comments Source: US Army