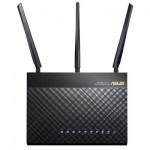 Some of ASUS’s big Computex 2013 launches today involved the latest 802.11ac WiFi flavor, and since you’ll need to feed them with a router packing the same tech, ASUS has also announced one of those: the RT-AC68U. The company claims it’s the first dual-band 802.11ac router with AC1900 data rates up to 1900 Mbit/s, thanks to AiRadar beamforming, which helps bring a stronger connection and 150 percent better range, too (if accurate). You’ll also be able to share files between ASUS routers with USB-attached drives thanks to a router-to-router sync mode, negating the need for a switched-on PC or other device. There’s no word on pricing or availability, but the previous RT-AC66U flagship ran about $200 or so — so we’d be surprised if it came in under that figure. Filed under: Peripherals , Wireless , ASUS Comments