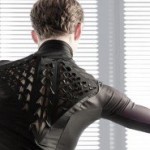 Add / Remove From probiotic yoghurt to a lightbulb powered by bacterial bioluminescence, the large diversity of microorgamisms in the natural world have had huge benefits for humans. Researchers at MIT’s Tangible Media Group have now found a way to use bacteria in clothing. The team used Bacillus Subtilis Natto — the same cultures used to ferment the Japanese soybean breakfast dish — to create electronics-free ‘smart’ fabrics. The clothing, called bioLogic, looks like sportswear with vents spread across the back. These vents contain layers of the bacteria spread across the body’s natural heat and sweat points. The bacteria naturally swell in the presence of humidity, so that when the wearer begins to sweat, the vents open up, allowing heat to escape naturally. With the ability to grow huge amounts of useful bacteria in labs relatively cheaply, what other industries could benefit from bacterial design? Website: www.tangible.media.mit.edu Contact: tangible-admin@media.mit.edu The post Bacteria powered breathable clothing appeared first on Springwise .