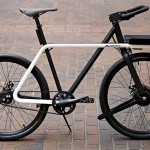 Biking in Seattle can be less than mellow with all the hills, traffic and especially that rain . But those things are exactly what inspired the Teague team of bicycle designers to build the Denny bike for the Oregon Manifest bike design project. Teague’s model (built by fabricator Tom Sizemore ) sports a minimalist frame, which belies all the tech packed inside. First off, you’ve got an electric motor on the front hub (with a removable battery) to boost your pedaling, along with an automatic shifter. To combat the constant showers, the Denny has a simple device with rubber bristles that breaks up the water, rather than a clunky fender. Since city driving is fraught with danger , the Denny also has safety features like daytime running lights, brake lights and turn signals activated by bumping the brake handles. And to keep that minimalist form, the handlebars function as either a nifty quick locking system, or fully detach to secure the frame and back wheel. For now, the bike remains experimental as part of the Oregon Manifest Bike Design Project. However, whichever bike wins the contest will actually go into production, and previous champs like the Faraday Porteur have lived on as crowdfunded production models . Filed under: Transportation Comments

Read the article:
Bike of the future removes the need to shift gears, pedal up hills or pack a lock

Planes Don’t Carry Tanks Of Oxygen.  So What’s In Your Emergency...