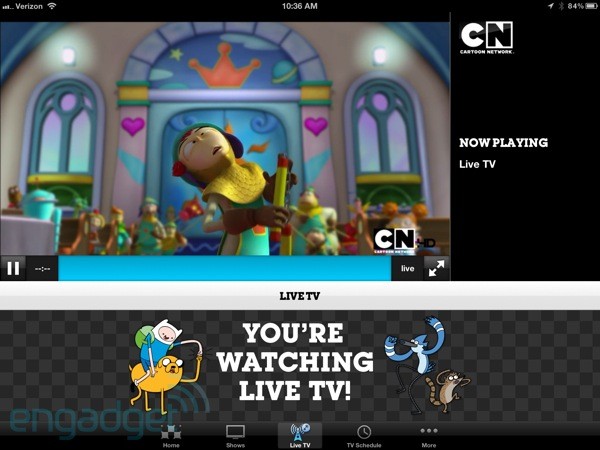 Cartoon Network announced plans to join the TV Everywhere party with a live internet feed of its channel (for authenticated cable / satellite customers) during upfronts and now the updated v1.8 app has arrived on iPhones and iPads. The feed can also be streamed with Flash on the channel’s website (we tried it on an Android 2.3 device and logged in but couldn’t get it to play), although the only differences we noticed were that the website feed was slightly ahead of our cable box and iOS was a few seconds behind, but with slightly higher picture quality. All in all it’s very similar to the WatchESPN experience (which ABC expanded upon last week with Watch Disney, Watch Disney Jr and Watch DisneyXD apps, though the full experience is only currently available to Comcast customers), and should satisfy all those who have been missing the Toonami experience when they’re away from home. Take a peek after the break for a preview trailer, shot of the login screen and press release.

Cartoon Network’s iPhone and iPad app adds a live TV feed, for authenticated customers originally appeared on Engadget on Tue, 19 Jun 2012 21:34:00 EDT. Please see our terms for use of feeds.