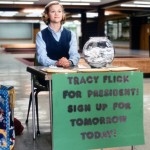 While we patiently wait for the network to finally deliver Star Trek: Discovery , CBS has been slowly growing its in-house All Access streaming service. In the past few months, CBS has added live TV , NFL games and the Grammies to its event lineup, but now its on-demand selection is getting its own upgrade with the addition of full-length movies. As TechCrunch notes , CBS quietly rolled out the new section last week and only offers a small selection of 18 films licensed from Paramount Studios at the moment. Although the company plans to grow the lineup in the near future, current choices include Election , Rosemary’s Baby and Up in the Air . Anyone who needs a classic Star Trek fix will probably be delighted to learn a number of those films are included, even as they’ve suddenly disappeared from Netflix in the US. For now, CBS is hoping the latest entry to the Star Trek franchise, as well as its Good Wife spinoff The Good Fight , will be enough to start luring more users to the service. The president of CBS Interactive Marc DeBevoise recently told New York Magazine that the company plans to branch out into even more original content this year, but they’re still trying to find the sweet spot that will drive users to pay for “a premium version of CBS.” As for the release date for Discovery , DeBevoise says production is “going great, ” but wouldn’t commit to a fall premiere. Via: TechCrunch Source: Cord Cutters News