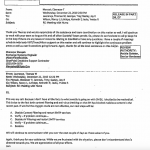 Part of an e-mail thread discussing workarounds to keep Hillary Clinton’s private e-mail server from being blocked by security filters at the State Department. 2 more images in gallery Documents recently obtained by the conservative advocacy group Judicial Watch show that in December 2010, then-US Secretary of State Hillary Clinton and her staff were having difficulty communicating with State Department officials by e-mail because spam filters were blocking their messages. To fix the problem, State Department IT turned the filters off—potentially exposing State’s employees to phishing attacks and other malicious e-mails. The mail problems prompted Clinton Chief of Staff Huma Abedin to suggest to Clinton, “We should talk about putting you on State e-mail or releasing your e-mail address to the department so you are not going to spam.” Clinton replied, “Let’s get [a] separate address or device but I don’t want any risk of the personal [e-mail] being accessible.” The mail filter system—Trend Micro’s ScanMail for Exchange 8—was apparently causing some messages from Clinton’s private server (Clintonemail.com) to not be delivered. Some were “bounced;” others were accepted by the server but were quarantined and never delivered to the recipient. According to the e-mail thread published yesterday by Judicial Watch, State’s IT team turned off both spam and antivirus filters on two “bridgehead” mail relay servers while waiting for a fix from Trend Micro. Read 4 remaining paragraphs | Comments

Originally posted here:
Clinton’s private e-mail was blocked by spam filters—so State IT turned them off

Pandora, one of our favorite streaming music services, unveiled a new...