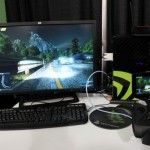 Nvidia’s Shield tablet can stream full PC games from your Steam library as long as you’re using a GeForce graphics card. This may be the best way to stream your PC games to your tablet. Andrew Cunningham In practically every one of its major press conferences since last year’s GPU Technology Conference, Nvidia has reminded us that they want to virtualize the graphics processor. The company wants to take it out of the computer on your lap or on your desk and put it into a server somewhere without you noticing the difference. It introduced the concept at GTC 2012. Then over the course of the next year, Nvidia unveiled the actual graphics cards that would enable this tech, started selling them to partners, and also stuck them in Nvidia Grid-branded servers aimed at both gamers and businesses . The difference between Nvidia’s initiatives and more traditional virtualization is that the company’s products support relatively few users for the hardware they require. The Grid gaming server supports 24 users per server box and the Visual Computing Appliance (VCA) only supports eight or 16 depending on the model. Most virtualization is all about dynamically allocating resources like CPU cycles and RAM to give as many users as possible the bare minimum amount of power they need. Instead, Nvidia’s is about providing a fixed number of users with a pretty specific amount of computing power, thus attempting to recreate the experience of using a regular old computer. There are situations where this makes sense. Given the cost of buying and maintaining workstation hardware, Nvidia’s argument for the VCA seems more or less convincing. But I’m slightly less optimistic about the prospect for the Grid gaming server, or any cloud gaming service, really—call it leftover skepticism from OnLive’s meltdown earlier this year . Read 11 remaining paragraphs | Comments

Read the original post:
“Cloud gaming” has a future—just maybe not in the cloud