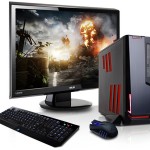 Not interested in buying a Steam Machine this year, but still want a tiny gaming PC? Never fear — CyberPowerPC has just released the Zeus Mini , its latest take on a conventional small computer with full-sized performance. The system is just 4.4 inches thick and 18 inches deep, but it has room for fast video cards like AMD’s R9 290 or NVIDIA’s GeForce GTX 780. You’ll also find a high-end AMD Kaveri or Intel Haswell processor inside, and there’s space for a large liquid cooling system if you insist on a silent rig. Zeus Mini prices start at $599 for a basic variant with a 3.7GHz AMD A10 chip and integrated graphics, but demanding players can shell out $1, 479 for a flagship model with a 3.5GHz Core i7 and GTX 780 video. Filed under: Desktops , Gaming , AMD , Intel , NVIDIA Comments Source: CyberpowerPC