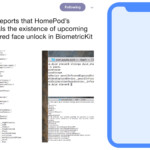 Ever since our close look at an alleged render of the next iPhone back in May, there have been rumors of 3D face scanning plus a large screen-to-body ratio flying about. Today, we finally bring you some solid evidence about these features, courtesy of — surprise, surprise — Apple itself. After digging up new details about the Apple HomePod in its leaked firmware , iOS developer Steve Troughton-Smith came across some code that confirm the use of infrared face unlock in BiometricKit for the next iPhone. More interestingly, in the same firmware, fellow developer Guilherme Rambo found an icon that suggests a near-bezel-less design — one that matches rumored schematics going as far back as late May. For those in doubt, Troughton-Smith assured us that this icon is “specific to D22, the iPhone that has Pearl (Face ID).” These discoveries are by far the best hints at what to expect from the “iPhone 8, ” which is expected to launch later this year . Additionally, we also learnt from our exclusive render that the phone may feature a glass back along with wireless charging this time. That said, there’s still no confirmation on the fate of Touch ID: while the HomePod firmware code seems to suggest that it’s sticking around, there’s no indication as to whether it’s ditching the usual Home button execution in favor of an under-display fingerprint scanner (as shown off by Qualcomm and Vivo at MWC Shanghai). Given how poorly Apple has been guarding the secrets of its next smartphone this time round, chances are we’ll hear more very soon. I can confirm reports that HomePod’s firmware reveals the existence of upcoming iPhone’s infra-red face unlock in BiometricKit and elsewhere pic.twitter.com/yLsgCx7OTZ — Steve T-S (@stroughtonsmith) July 31, 2017 Me too. New bezel-less form factor as well pic.twitter.com/Y0RrSOk2OO — Guilherme Rambo (@_inside) July 31, 2017 Source: Steve Troughton-Smith , Guilherme Rambo

View post:
Firmware suggests the next iPhone will use infrared face unlock