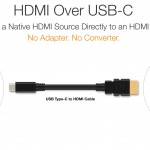 More devices are starting to ship with USB-C connectors built-in, and today groups behind HDMI and USB announced another way to take advantage of it. That method is HDMI Alt Mode, which means cable manufacturers can build a connector that plugs directly from the port on your phone, laptop or other device into the HDMI port on a TV or monitor. With this spec, there’s no additional dongle or adapter needed in the middle. It’s all pretty simple, with just a USB Type-C cable on one end, HDMI on the other, but there are a couple of drawbacks. It supports the older HDMI 1.4b spec instead of the newer HDMI 2.0b . What that means for you is that while 4K video, 3D, HDMI-CEC and Audio Return Channel are all supported , it won’t be quite enough to send the newest Ultra HD 4K video with HDR . That’s probably not an issue if you’re just trying to play a video or two from your phone, but it’s good to know.

See the original article here:
Get ready for simple USB-C to HDMI cables

Hertz Is Pulling a Disney