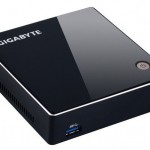 The mini PC market isn’t exactly a crowded one, but it’s never a bad thing to have options . Well, if you’re into the idea of adding an ultra-compact to your setup, Gigabyte’s just announced its highly customizable BRIX. The palm-sized PC appears to be the very same one we saw back at this year’s CES , but it’s now taken on a more polished, ready-to-hit-shelves look. Gigabyte’s providing interested parties the ability to load this itty-bitty thing with a vast selection of Ivy Bridge chips (Core i3, i5 and i7), plus their own SSD / RAM combo and operating system of choice. Ports-wise, there are two USB 3.0 sockets, HDMI and a Mini DisplayPort — Gigabyte notes it can power up to two displays simultaneously. Naturally, the cost depends on the specs you choose, and the company only goes as far as to say that the BRIX covers “a range” of price points. Gallery: Gigabyte BRIX press shots Filed under: Desktops , Misc Comments Via: Fareastgizmos Source: Gigabyte

Stunning video of Mars from orbit