David Rothman writes: Eric Posner, the fourth most-cited law professor in the U.S., says the government may need to jail you if you even visit an ISIS site after enough warnings. He says, “Never before in our history have enemies outside the United States been able to propagate genuinely dangerous ideas on American territory in such an effective way—and by this I mean ideas that lead directly to terrorist attacks that kill people. The novelty of this threat calls for new thinking about limits on freedom of speech. The law would provide graduated penalties. After the first violation, a person would receive a warning letter from the government; subsequent violations would result in fines or prison sentences. The idea would be to get out the word that looking at ISIS-related websites, like looking at websites that display child pornography, is strictly forbidden” There would be exemptions for Washington-blessed journalists and others. Whew! Alas, this man isn’t Donald Trump — he is a widely respected University of Chicago faculty member writing in Slate. Read more of this story at Slashdot. 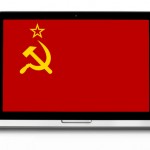 Tons of Hackers Are Hanging Out in Old Soviet Cyberspace