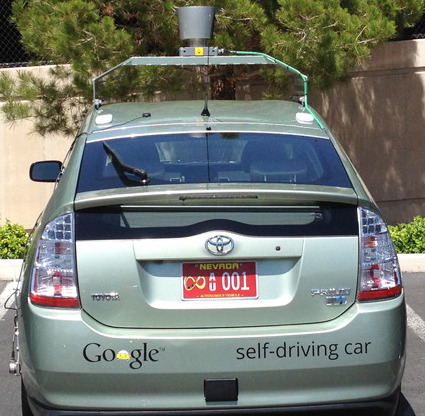 On Monday, the Nevada Department of Motor Vehicles approved Google’s license application to test autonomous vehicles on the state’s roads. The state had approved such laws back in February, and has now begun issuing licenses based on those regulations.

The state previously outlined that companies that want to test such vehicles will need an insurance bond of $1 million and must provide detailed outlines of where they plan to test it and under what conditions. Further, the car must have two people in it at all times, with one behind the wheel who can take control of the vehicle if needed.

The Autonomous Review Committee of the Nevada DMV is supervising the first licensing procedure and has now approved corresponding plates to go with it, complete with a red background and infinity symbol.

“I felt using the infinity symbol was the best way to represent the ‘car of the future,’” Nevada DMV Director Bruce Breslow said in a statement.

“The unique red plate will be easily recognized by the public and law enforcement and will be used only for licensed autonomous test vehicles. When there comes a time that vehicle manufacturers market autonomous vehicles to the public, that infinity symbol will appear on a green license plate.”

Eagle-eyed Ars readers: if you spot this car in Nevada, snap a pic and let us know!