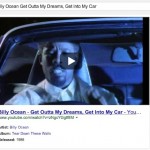 As clever as Google’s search is, finding official YouTube music videos is often harder than it should be, hampering efforts to successfully get your soft rock fix. In a new change rolling out now, the search giant has made it easier to surface such videos by giving the top playable link its very own card. While Google cunningly displays a video player as the top result, it actually directs you to YouTube (and other sites like Vimeo or Dailymotion) to serve legitimate uploads by music labels and the inescapable VEVO . It’s definitely a step in the right direction, but Google hasn’t totally nailed the implementation and often displays fan-made videos or doesn’t show one at all. Despite the rise in legal music streaming sites, Google’s well aware YouTube still beats Spotify et al in terms of total users, which is probably why it’s readying its own music subscription service . Filed under: Internet , Google Comments Source: Search Engine Watch

Largest digital survey of the sky mapped billions of stars