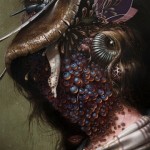 Christian Rex van Minnen paints his subjects in a very classic style of European portraiture, but makes the subjects themselves hideously grotesque. From humanoid fungus to creatures that appear to be half-cartoon, van Minnen’s portraits are compelling and repulsive all at once. Van Minnen combines a wide range of visual inspirations for his portraits, often jamming fashion, biology (with a special emphasis on entrails and spider eyes), tattoos, logos, and bits of cartoon imagery into a single image. They feel at times overloaded (especially in his more recent work), but also fascinating as our brains try to resolve how all those pieces could fit together into one cohesive painting. Some of his subjects look like plausible alien creatures, while others are deformed refugees from Toon Town, but each possesses its own unsettling beauty. Van Minnen is featured in Issue 25 of Hi-Fructose Magazine , where you can also take a peek at his solo show, Welsh Rats , which opens today at Robischon Gallery in Denver. And be sure to check out van Minnen’s website for more portraits and alien still lifes as well. Christian Rex van Minnen [via Hi-Fructose ]

View the original here:
Grotesque Portraits of Aristocrats from Another Dimension