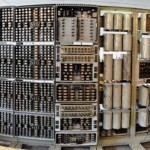 Over 60 years since the first digital computers switched on, the chances of seeing one of these pioneers in action have grown incredibly slim as time (and recycling) takes its toll. Take a visit to Britain’s National Museum of Computing in Bletchley Park as of today, however, and you’ll see one working. A finished 3-year restoration effort lets the Harwell Dekatron — at one point renamed the Wolverhampton Instrument for Teaching Computation from Harwell, or WITCH — claim the title of the world’s oldest functional digital computer still using its original design. Aside from its room-filling dimensions, the 1951-era mainframe may be worth the trip just for recalling a time when there were no hard and fast rules in computing: the Dekatron operates in its namesake decimal system, not binary, and puts most of its components on full display. The computer is part of the regular exhibit lineup and should be easy to see; the daunting part may be realizing that virtually any chip in a 2012 smartphone could outmuscle the Dekatron without breaking a sweat. Filed under: Desktops , Misc , Alt Comments Via: Slashdot Source: National Museum of Computing