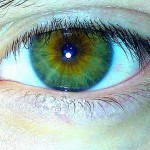 (credit: Flickr user Hullabaloon. ) One of the less satisfying aspects of modern physics is the increasing separation between the phenomena that we measure and the experimenter. We measure almost everything today indirectly. If we operate our lab safely, we never directly detect an electron—instead, that charge creates a tiny potential difference on an amplifier. The amplifier generates a larger current that might drive a coil that is attached to a needle on a dial. This level of indirection is the reality of modern physics. And the alternative—passing large currents through your body—is discouraged. Yet, the desire to really see what is going on is hard to resist. This has led to an interesting publication that proposes a way to detect quantum mechanical behavior directly with the human eye. Seeing single photons The behavior in question is entanglement. But before getting to that, let’s talk about the eye. The human visual system is a pretty poor instrument as far as optics go. The eye is actually pretty good; experiments have revealed that the rods in your eye are sensitive to single photons. The brain, however, is smart; rather than try to sort out all the noise associated with every single photon detection, it tells the rods and cones not to bother it until the light reaches a certain intensity. Read 15 remaining paragraphs | Comments

Millions of Websites Vulnerable Due To Security Bug In Popular PHP...

How Hot Is Too Hot for Your Computer to Run