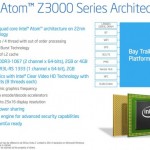 Intel News from a certain other company has overshadowed the 2013 Intel Developer Forum a bit this week, but Intel is hardly sitting still. For well over a year now, the company has been intensifying its efforts in the mobile space, first with Android phones and later with both Windows and Android tablets. The chips the company has been using to make these strides into mobile have all used the Atom branding, which has come a long way since its inclusion in the low-rent netbooks of years past. Chips like Clover Trail and Clover Trail+ have proven that an Intel phone’s battery life can hang with ARM chips from companies like Qualcomm and Nvidia, even if their performance sometimes leaves something to be desired. Now, Intel is ready to take the next step. We’ve talked about its next-generation Atom system-on-a-chip (SoC) for tablets (codenamed Bay Trail ) before, and at IDF this week the company finally announced specific Bay Trail SKUs and devices that will include the chips when they ship later this year. Read 25 remaining paragraphs | Comments

What It Really Means When a Program "Leaks Memory"