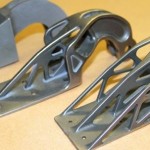 American 3D printer manufacturers have stolen a lead on the competition, but a Japan-based alliance is looking to fight back… it’ll take a year or two, is all. The group includes universities, 27 companies including the likes of Panasonic, Nissan and Kawasaki, as well as the Japanese government. Rather than cheerfully-colored figurines and trinkets, the group plans to use titanium-based materials to craft complicated components like airplane parts and artificial joints for medical use. For the government’s part, it’s promising 3.8 billion yen ($36.5 million) this year, with each member organization adding another 500, 000 yen per year to the research group. According to the Nikkei, work will focus on advanced tech that will allow 3D-printed components through (awesome-sounding) “molten metal powders.” The aim is to have prototype machines by 2015, with some 3D printers ready for sale as commercial products. Final finished machines for making medical equipment and aircraft manufacturers will apparently take another four years to perfect. Filed under: Misc , Science Comments Source: Nikkei

More:
Japan looks to next-gen 3D printers for a return to manufacturing success

The iPhone 8 reportedly swaps the home button for gesture controls