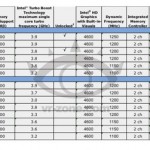 The folks over at VR-Zone have snagged a chart which purports to represent Intel’s plans for the Haswell architecture in 2013. If genuine, then we can expect at least 14 new desktop CPUs to arrive next year, including a range-topping 3.5GHz Core i7 with 400MHz of headroom in boost mode and a TDP of just 84W — i.e. midway between Sandy and Ivy Bridge in terms of power consumption, but not bad when you consider this’ll be a higher performance architecture with no transistor shrinkage . Integrated graphics have also apparently been tweaked, with a reference to HD 4600. Since we can’t expect Intel to confirm the leak, we’ll just have to file this one in the “plausible” cabinet. (What, you didn’t know we had filing cabinets?) Comments Via: Ubergizmo Source: VR-Zone (Translated)

The Planet’s Biggest Water Supply Might Be Hidden 400 Miles Below...