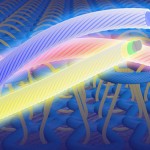 Researchers who are obviously Saved by the Bell fans have developed clothing fibers that could turn you into a walking neon sign. Rather than OLED or LCD tech, the team exploited polymer light-emitting electrochemical cells (PLECs) that are rugged enough to be used in fabrics. They created a millimeter-sized fiber that’s decidedly high-tech — it consists of a thin steel wire coated with nanoparticles and an electroluminescent polymer, topped by a transparent carbon nanotube outer layer. A prototype fabric glowed for several hours, but so far, the light colors are limited to blue and yellow. However, PLEC tech has a theoretical life span of thousands of hours, and more colors are technically possible. The fibers could feasibly “be woven into light-emitting clothes for the creation of smart fabrics” or used for biomedical applications, according to lead scientist Zhitao Zhang from Shanghai’s Fudan University. However, there are a few hurdles to clear. The fibers are too short to be woven into clothing and, like your old Christmas tree lights, are still too unstable. On the other hand, they require less power than LEDs and are transparent and conductive — meaning they have potential to be used for human- or solar-powered wearables. We could also see them in future invisibility cloaks if combined with tiny cameras. For now, it’s just a rough prototype, but display tech often goes from concept to reality a lot faster than other scientific pipe dreams . Filed under: Wearables , Science , Alt Comments Via: Spectrum IEEE Source: Nature 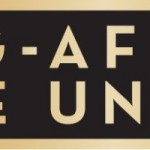 The Oldest Known Human Remains In the Americas Have Been Found...