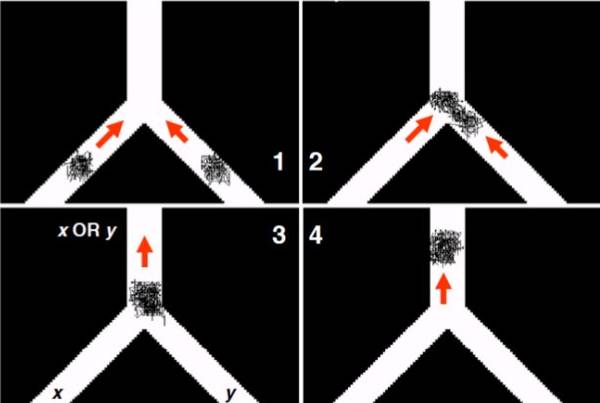 In Robust Soldier Crab Ball Gate, recently published in Complex Systems, a Japanese-UK computer science team describe how they made functional logic gates by constructing a maze of narrow tunnels and spooking soldier crabs into running through them in predictable ways by exposing them to bird-of-prey silhouettes. Lead researcher Yukio-Pegio Gunji (Kobe University) and colleagues implemented a “billiard ball computer” (a computer that implements logic gates out of chutes through which balls are dropped, either colliding or falling straight through) using the crabs, who have a repertoire of deterministic flocking responses to various stimuli, including narrow passages and the presence of predator shadows. The result is a relatively functional AND gate and a less-reliable OR gate. A Technical Review blog summarizes the method well:

When placed next to a wall, a leader will always follow the wall in a direction that can be controlled by shadowing the swarm from above to mimic to the presence of the predatory birds that eat the crabs.

So what happens when two “crab balls” collide? According to Gunji and co’s experiments, the balls merge and continue in a direction that is the sum of their velocities.

What’s more, the behaviour is remarkably robust to noise, largely because the crab’s individuals behaviours generates noise that is indistinguishable from external noise. These creatures have evolved to cope with noise.

That immediately suggested a potential application in computing, say Gunji and co. If the balls of crabs behave like billiard balls, it should be straightforward to build a pattern of channels that act like a logic gate.