At TechEd in Houston today, Microsoft announced a wide range of updates to its Azure cloud platform. As has become customary for Azure updates, the new features announced today include a mix of previews of brand-new capabilities, and general availability releases of features previously only in preview. In the general availability bucket are a set of new networking options for connectivity to Azure. Currently, Azure users connect to Azure through a mix of public Internet addresses and private VPNs, with all traffic going over the Internet. The new ExpressRoute capability provides a third option: direct private connections to Azure, either through exchange providers, or by connecting Azure to existing corporate WANs. ExpressRoute will be offered with a 99.9 percent SLA and four bandwidth tiers: 200Mbps, 500Mbps, 1Gbps, and 10Gbps. Though now generally available, the connectivity is currently limited to connections via two US sites—Silicon Valley and Washington, DC—and London. Microsoft intends to make it available in 13 further locations by the end of the year. Read 10 remaining paragraphs | Comments 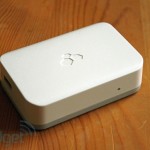 Kanex meDrive turns any USB drive into a NAS for iOS...

Scientists Just Grew a Whole Organ Inside an Animal For the...