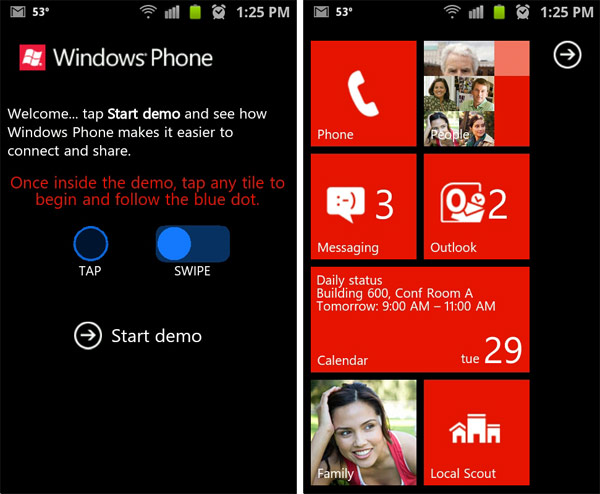 Still tempted by the fruit of another? If you’re looking Microsoft’s way, but aren’t quite ready to toss your adoration for iOS or Android aside, the coders in Redmond are giving you an alternative to quitting cold turkey. By visiting http://aka.ms/wpdemo on one’s iOS or Android browser, you’ll be immediately tunneled into a emulation of Windows Phone 7. We gave it a test run here at Engadget HQ, and it seems that every tile and swipe save for Apps runs properly. Can’t say the fonts and such looked as smooth on our Galaxy S II as they do on the Radar, but it’s a solid effort that’ll definitely serve you well if you’re considering the switch. Just don’t try to flip the demo horizontally — that’s clearly a no-no.

Microsoft enables Android and iOS users to experience Windows Phone 7… via the web originally appeared on Engadget on Tue, 29 Nov 2011 13:36:00 EDT. Please see our terms for use of feeds.