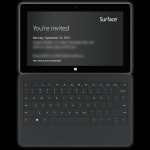 With no shortage of rumors about a next-gen Surface and Surface Pro — not to mention significant price cuts for both those devices — it’s no surprise that Microsoft is about to launch some new hardware. Redmond just sent out invitations to a press event scheduled for September 23rd, and it’s pretty clear from the image that the company has a new tablet (or two) to share. Will we see a smaller-screened Surface this time around, and can we expect a slew of new accessories ? Stay tuned — we’ll be bringing you all the news live from NYC. Filed under: Tablets , Microsoft Comments

Why Mathematicians Are Hoarding This Special Type of Japanese Chalk