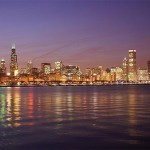 There’s a cloud hanging over the second city and it belongs to Microsoft . In a release issued today, Chicago Mayor Rahm Emanuel announced plans to migrate the city’s 30,000 civil servants to a cloud-based solution for email and all desktop applications . Apart from the $400,000 the four-year deal is projected to save taxpayers annually, the move to Microsoft’s cloud computing for government platform will also help to bolster efficiency and streamline communication internally, as the city goes from three conflicting email systems to just one. According to the city’s Department of Innovation and Technology, this department-wide transition should reach completion by the end of 2013. It’s not the Windy City’s first big leap into remote storage — its hosted Department of Aviation data there for some time — but it does mark Emanuel’s commitment to modernization . Hit up the break for the city’s official PR. [Chicago photo credit: Nimesh M / Flickr ] Continue reading Microsoft to provide cloud services for city of Chicago in four year deal Filed under: Internet , Microsoft Comments Source: The Official Microsoft Blog

World’s Only Sample of Metallic Hydrogen Has Been Lost