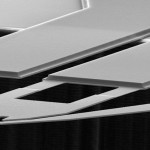 Over the past few decades, engineers have leveraged Moore’s Law to the fullest, resulting in powerful ultrathin laptops and feature-rich miniature wearables . Back in 1981, a 23-pound Osborne 1 computer was considered portable, with 64KB of onboard memory. Today, smartphones weigh just a few ounces and easily pack 128GB of storage. There’s also a vastly more complex architecture of circuits and sensors inside these devices, all at a scale nearly invisible to the eye. It’s taken us decades to develop and shrink down these microelectronics to where they are today, which is no small feat. Join us as we ride the ever-shrinking gadget wave from its early days to some of the nanoscopic creations at work today. [Image: IBM Research Zurich] Filed under: Robots , Science Comments

The Raspberry Pi Zero Is a $5 Computer the Size of...