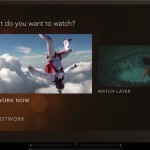 The music industry is extremely well-blanketed on the web, what with services like Pandora, iHeartRadio, Spotify, Rhapsody, iTunes Music and many, many more. But one can easily argue that the same can’t be said about online videos — namely, those available at no cost on YouTube , Vimeo , DailyMotion and other similar sites. Here’s where N3twork believes it can help. The startup, which describes itself as a “personal network for internet video, ” has taken a cue from Pandora on how it delivers content to you. The new app, available only on iOS at launch, uses your personal interests to tailor a feed of videos, allowing users to employ swipe gestures to skip (left) or watch later (right) — think of the latter option as a DVR of sorts. N3twork uses its sign-up process to know a little more about you, as that’ll determine what your stream looks like; the populated channels are hashtag-based, so there’s always the ability to keep subscribing to different stuff as you continue to use the app. And you can search, too, by simply pasting in a URL or using keywords for whatever category you’re into, including sports, photography, technology and others. In addition to that, N3twork also acts as a social network of sorts, as it lets you have followers and interact with people by way of likes and comments, as well as repost videos that you may have run into and liked. What stood out the most is how the application displays thumbnails — they’re not static images, but rather 15-second previews of the videos that are coming up on your feed. You can upload your own content as well, which can then be shared to your friends on Twitter or Facebook, as is the case for videos from your personalized stream. Since it is fully invested in iOS at the moment, N3twork told us it went the extra mile to create a second-screen experience for Apple TV (pictured above), which should provide a nice touch for people who want to use AirPlay to watch videos on a bigger screen. “The internet isn’t just cat videos. We want to put content that you care about in front you, ” N3twork’s founder and CEO, Neil Young, said to Engadget about what he hopes to accomplish with the new service. Filed under: Internet , HD , Mobile , Apple Comments Source: N3twork

Taken from:
N3twork wants to be the Pandora of internet video

The Best Free Alternatives to DynDNS