Russian startup Nettle , which is based in the Skolkovo Tech City area ,  is showing off a $28, 000 holographic gaming set-up at TechCrunch Disrupt SF’s Hardware Alley. The Nettlebox rig consists of a 3D plasma display, with four fisheye lens infrared cameras at the corners to track the position of the gamer who wears a pair of 3D glasses with two infrared lights onboard. The game itself is powered by a Windows PC built into the table. The set up tricks your brain into seeing a real-time holographic image of the game as you play. The holographic scenery appears sunken into the table, rather than standing out proud above the surface. Most importantly, the 3D illusion is sustained as you change your position so you can move around to get the best vantage point. “With this technology users can see a 3D screen from all viewpoints, from all angles, and see a 3D object in front of him. The brain believes that it’s a real object because the illusion is very strong, ” says co-founder Andrei Desyatov. “We are tracking the user’s position very fast.” The  Nettlebox’s proprietary cameras run at 1, 000 fps. That high frame rate is required to enable a “stable illusion” when the user changes their physical position, he adds. The camera range (i.e. the distance between the user and the table) is up to around 1.5 meters in the brightly lit (“noisy”) environment of the Disrupt conference hall but can extend up to 5 meters when using the Nettlebox in darker rooms, according to Desyatov. After a brief hands on — or eyes on — I can confirm it certainly works, and that the effect is pretty immersive, though it did feel like it could become rather disorienting. And possibly end up inducing a  headache/motion-sickness style nausea. But that’s likely to depend on your sensitivity to this sort of stuff (speaking as someone who had to quit playing Minecraft because mining its 3D blocks left me feeling too queasy). At $28, 000 the Nettlebox itself is not about to become the next great leap forward in home videogaming, but Nettle is targeting this device at the presentation/exhibition market. It is also working with real-estate companies on developing showroom/presentation use cases by, for instance, allowing architects to walk around a hologram of a model building. After that, it does have videogaming in its sights. ”The next step for us is gaming. We are going to create a gaming machine for amusement parks, ” says Desyatov. “And then the last step is for videogames like strategies like Starcraft and so on.” Pushing the Nettlebox into the home gaming market is going to require some serious squeezing of its price tag but Desyatov reckons it will be possible to build something that is “affordable for most users.” Nettle is bootstrapping at present and launched the Nettlebox in Russia a few months ago. It’s got five customers so far and is looking to expand that customer base internationally, eyeing the U.S. market. “We’re thinking about looking for external funding to increase the speed of entering the gaming industry, ” he adds.

More:
Nettlebox Is A $28,000 Hologram Rig That Lets You View Real-Time 3D From All Angles 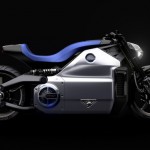 World’s most powerful electric motorcycle looks like the future