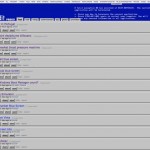 The new subreddit Public Blue Screens of Death. I swiped my credit card at a gas station last week, and as I replaced the nozzle, the pump’s display screen froze, blanked, and then rebooted. I had never seen such a thing before. Not sure if I had actually paid for the gas or not, I went inside and told the cashier. “It happens,” she said. Indeed it does. Thanks to our ever-more-computerized world, crashed software and arcane error messages are a common sight in public-facing displays. A new subreddit called Public Blue Screens of Death aims to chronicle these public crashes, especially those that result in the infamous Windows “blue screen of death” (BSOD). This isn’t the first such collection of BSODs, of course. The Flickr group ” Public Computer Errors ” has been around since 2005 and contains 1,500 images—but its remit extends far beyond the BSOD. More commonly, public BSODs are collected into humorous, one-off roundups . The new subreddit aims to be an ongoing archive of such material, however, and it has been skinned to resemble an old Windows display. Read 4 remaining paragraphs | Comments

The Moon Might Be Littered With Fossils From Ancient Earth