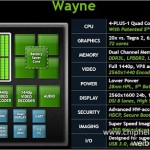 NVIDIA’s next superhero-themed mobile chipset has possibly made an early appearance in a leaked side in China, and it looks like it wants to go toe-to-toe with the latest processors from Samsung and Qualcomm. The Tegra 4 (codenamed Wayne) will apparently offer the same power-efficient 28nm process found on its Snapdragon rival and according to the slide from Chip Hell , there’s a dizzying 72-core graphics setup. That’s apparently 20 times the power found the Tegra 2 and six times that in the last-generation Tegra 3, which powered, among other devices, the Nexus 7 . Those graphics cores will be able to power screens up to 2,560 x 1600, with 1080p output at 120Hz, while the leak also mentions 4K — if only in passing. We won’t see any increase in CPU cores this time, with the same 4-plus-1 setup , but we are likely seeing a move to ARM’s latest design, the Cortex-A15 . It’ll also catch up with USB 3.0, being NVIDIA’s first mobile chip to do so, alongside dual-channel DDR3L memory. We’ve reached out to chipmaker and we’ll let you know when we hear more, but it’s highly likely we’ll be seeing this next-generation processor early next year — say, at a mobile trade show . Filed under: Cellphones , Tablets , Mobile , NVIDIA Comments Via: Mobile Geeks Source: Chip Hell

Hands-On With LG And Google’s First Smartphone Collaboration, The Nexus 4