An anonymous reader quotes CNN: A power outage at the world’s busiest airport left thousands of passengers stranded in dark terminals and in planes sitting on the tarmac, amid a nationwide ground stop. Incoming and outgoing flights at Atlanta’s Hartsfield-Jackson International Airport were halted indefinitely as crews worked to restore power, leading to hundreds of flight delays and cancellations. Atlanta is the heart of the US air transport system, and what happens there has the potential to ripple through the country. More than 600 flights to and from Atlanta have been canceled, including 350 departures, according to Flightradar24… Flights headed to Atlanta are being held on the ground at their departure airport. Inbound flights to Atlanta are being diverted, US Customs and Border Protection said. Departures from the airport are delayed because electronic equipment is not working in the terminals, the FAA said. The cause of the incident is under investigation. Some people stranded in the dark terminals used their cellphones as flashlights, one passenger told CNN. “There were a few emergency lights on, but it was really dark — felt totally apocalyptic.” Read more of this story at Slashdot. 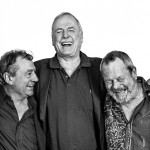 A Conversation with John Cleese