Qualcomm, the world’s largest supplier of chips for mobile phones, is reeling after announcing a 47 percent drop in quarterly profit compared to the same period in 2014. On Wednesday, the San Diego-based firm said that it made $1.2 billion in net income during the third fiscal quarter of 2015, down from $2.2 billion a year ago. As a way to bounce back, the company also announced that it would be cutting 15 percent of its workforce, and would “significantly reduce [our] temporary workforce.” Read 4 remaining paragraphs | Comments 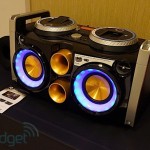 Philips showcases its 2013 Fiedelio audio lineup at CES, we go...