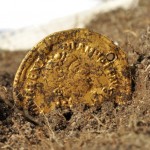 A Roman coin found at the site of Sandby Borg, whose inhabitants probably included a number of unemployed Roman soldiers. (credit: Max Jahrehorn Oxides) On Öland, an icy island off the coast of Sweden, archaeologists have unearthed the remains of a 1,500-year-old fort whose inhabitants were brutalized in such an extreme way that legends about it persist to this day. As researchers piece together the fort’s final days, it sounds like they’re telling a horror story. Possibly hundreds of people sheltering behind the fort’s defenses were executed and abandoned, their bodies left to rot in place without burial. Their wounds were indicative of execution. And some of their mouths were stuffed with goat and sheep teeth, possibly a dark reference to the Roman tradition of burying warriors with coins in their mouths. None of their considerable wealth was looted, which is highly unusual. Researchers have found barely hidden valuables in every house they’ve excavated. Even the livestock was left behind after the slaughter, locked up to die of starvation. This is even more bizarre than the lack of looting. On an island with scarce resources, it would have been considered a waste for victors (or neighbors) to leave healthy horses and sheep behind after battle. Read 10 remaining paragraphs | Comments

Read the original:
Remains at a Swedish fort tell a story of bloody Iron Age warfare 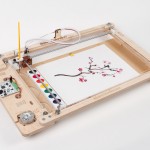