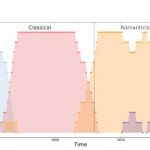 Can you identify Beethoven’s Sonata No. 9 after hearing a mere three notes? Probably not, but a group of computer scientists and music scholars have built a machine that can do just that. The team — composed of Pablo Rodriguez Zivic, Favio Shifres and Guillermo Cecchi — has developed an algorithm capable of identifying patterns across distinct periods of Western music based on semi-tones and notes. Beyond its musical application, the machine represents tantalizing possibilities for research into disorders that affect speech. For example, current mechanical methods are already capable of recognizing vocal patterns common in the early stages of Parkinson’s , but the trio hopes to utilize their project for even earlier detection. Such an algorithm could also be instrumental in identifying psychiatric conditions that impact the speech centers of the brain. Unfortunately, the lack of a comprehensive database of different types of speech patterns stands in the way of wider implementation. Even so, the team is hopeful that verbal tests might someday be used in place of invasive diagnostic procedures to identify certain illnesses. Filed under: Science , Alt Comments Via: IBM Source: Proceedings of the National Academy of Sciences